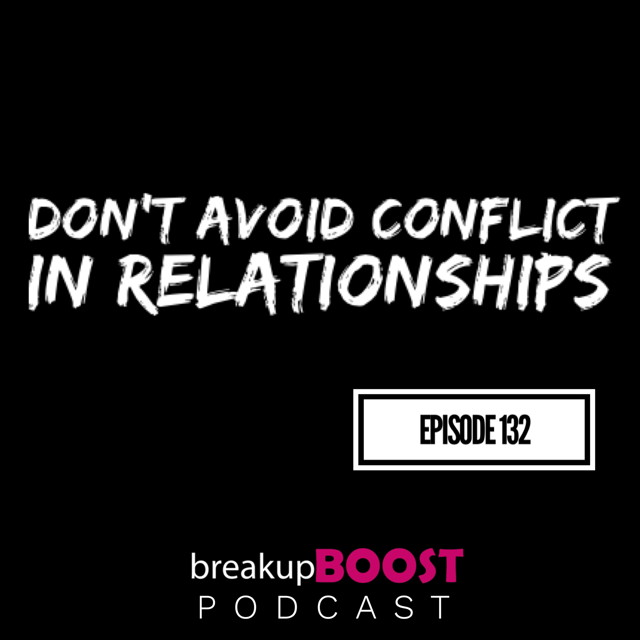 Who enjoys arguing with their partner? I’d say it’s probably the last thing that anyone wants to do. It causes so much stress and anxiety, as well as hurt and depressed feelings. It can affect your life overall in a negative way.

It’s even worse when people end up saying things in the heat of the moment that they regret later. Words can really sting and it can feel near impossible to just forget what was said even long after you make up.

LISTEN to the full episode now…or continue reading below:

People often want to avoid conflict at all costs.

So why do people choose to avoid conflict? Well, it’s often out of fear of losing the other person, so instead they just remain silent to try to keep the peace…especially at the beginning of a new relationship.

This can lead to overlooking red flags and brushing things under the rug. That said, there is a huge difference between blow out arguments and healthy conflict. Most people think “argument” when they think “conflict” but when you change your perspective, the way you look at conflict will change.

So think of it in terms of discussion vs. fight where one or both of you starts to hit below the belt.

It’s when you let things fester and build up that it becomes a much bigger issue. When people hold things in too long, they will eventually explode like a volcano. This is why you need to deal with things as they pop up.

When you are in a relationship, conflict is going to happen – you aren’t doing yourself or your relationship any favors by avoiding it.  The key is to keep it HEALTHY and calm…and it is MUCH easier to keep it healthy and calm when you don’t have months or years of issues piled up like a mountain.

When you have a partner that you can feel comfortable with, you are winning. They will make you feel like you can talk to them about anything and they will encourage this. When you feel this way, you WILL feel like conflict is more of a discussion.

It can feel like a huge load of bricks was unloaded from your shoulders when you get something off your mind. And once you do this once, you then learn how your partner responds to you addressing something that is bothering you. It will set the tone for going forward.

It’s in difficult times that we see people’s true colors come out. Someone who is going to be mad at you or breakup with you for bringing up an issue that has been weighing on your mind is not a good match. The right person will appreciate that you cared enough to address it to make the relationship better…or maybe even save the relationship.

Your relationship just won’t get very far if you are unable to deal with conflict, both as an individual and as a team.

When too much resentment builds up, it’s like poison for a relationship and it can get to a point where it is really hard to recover from.

Also, if you choose not to tackle problems as they arise, it can prevent your relationship from progressing, because dealing with conflict can actually make you stronger as a couple. It creates a stronger CONNECTION to one another becomes the door of vulnerability opens up.

I always say look at the positives.

If your partner is addressing something, it shows they are still invested in the relationship…otherwise they could have already walked away.

When you care, you want things to get better and you are willing to work things out.

It will make your future communication that much better because you will feel as though you can talk to each other about anything without letting fear to hold you back.

If you are with someone who avoids conflict at all costs and ignores you when you bring something up…or completely dismisses your feelings, be grateful that you just weeded them out, because that is NOT the type of person you want in your life.

So in summary…don’t shy away from conflict. No relationship is perfect. It is inevitable to have conflict. Just deal with it head on and be respectful.