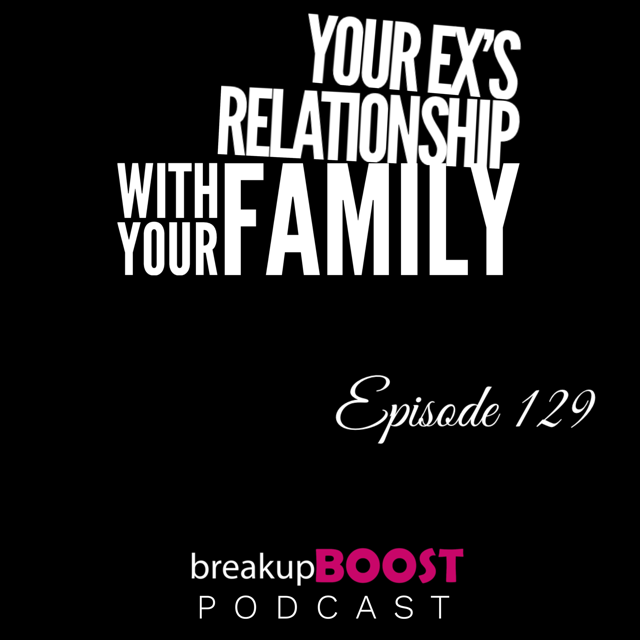 After a breakup, you can find yourself in a tricky situation if your ex got close to any members of your family while you were together, whether that be your immediate family or your cousins for example. Or maybe they knew your ex even before you did. Whatever the case may be, listen for what I have to say about this:

Not able to listen right now? Read below:

I personally think a clean break is the best way to go, meaning once the relationship ends, so do the other connections. It just seems like the easiest way to heal…at least for a certain duration of time after the breakup.

And I know that there’s probably people listening thinking “People should be able to handle it like mature adults” … but those are the people who AREN’T the ones who just broke up and are suffering with broken hearts…so of course it’s easy for them to say that. You should always put yourself in your loved one’s shoes. ALWAYS.

So yeah, you don’t always have control over how things play out. I mean, your family should always have YOUR back and put YOUR feelings first, but it doesn’t always go like that. Some people may feel as though you have no right to tell them they can no longer be in contact…especially if you had a long-term relationship and people spent a lot of time together.

It also depends on WHY the relationship ended. If it was due to abuse or infidelity for example, your family should definitely have the common sense to know that it would not be appropriate to maintain any relationships with your ex…and not only because it would be wrong ethically, but also because it would likely then strain their relationship with you.

If you have children together, it is pretty hard to avoid some sort of interaction with your exes family, whether that be due to dropping them off, picking them up, seeing them at birthdays, special events, or holidays. If your children see that you have no relationship or try to completely avoid the other side of the family, it can make it very uncomfortable for them too. They may also feel like they have to pick sides or even keep secrets…and that is just not fair to kids to have to deal with that. It is much better if people can handle the breakup maturely so that the children aren’t negatively affected. Breakups and divorces are hard enough on kids. You don’t want to make it any harder.

And remember, when you have kids with someone, you will be connected for the rest of your life to some degree. Even AFTER they turn 18 – in the large majority of cases, there will still be things that come up where family members have to see your ex…such as weddings or funerals. So overall, it’s just a good idea to make the best out of it and get everyone on the same page. Establish boundaries if you have to.  Do whatever you have to do to make it work. Seek family counselling if need be.

Next on the list … your ex could have business ties with your family. It wouldn’t be realistic to just let their business fall to the wayside or have to sell it (or whatever the case may be) because you broke up. Plus, it could be a situation where they had business dealings with your ex BEFORE you even met.

And the same thing goes for non-business relationships that may have existed BEFORE you started dating. You can’t really go and tell people who have been long time friends to stop being friends now. There are cases where your family may have even introduced you to your ex, so you have to remember that at one time you were grateful that they knew your ex so that you could meet them.

In these cases, you should definitely establish some boundaries in terms of them not popping up at your house etc. I think out of site, out of mind is definitely the best way to handle it. Oh and also, be sure to tell your family that you don’t want them gossiping about your business with your ex because that’s just not cool and can start to cause trust issues going forward.

The ideal scenario would be when it doesn’t bother you one iota if your family is friends your ex. These are usually in cases where you just grew apart overtime or decided to mutually separate because there was just no spark left. In the cases where you have less feelings for your ex, it is SO much easier to accept your family still being friends with your ex.

It’s not cool for your family to still be friends with your ex if you feel uncomfortable with your ex being friends with your family, because like I said, your family has to have YOUR back at the end of the day. If they can see firsthand that you are having a tough time moving forward, they shouldn’t even have to think twice about it.  Plus, they need to ask themselves if it is worth straining their relationship with YOU. I would hope the answer would be no.  There’s this thing called LOYALTY and to me personally, loyalty is everything. And when you have an opportunity like this to show someone where your loyalty lies, it can work wonders on your relationship and strengthen it.

I would suggest to have separate discussions with both your ex and your family explaining why so they can see it from your perspective. Stay calm and definitely don’t do it when feeling overly emotional or angry. If you come across as threatening or angry to your ex, for example: “stay away from my family” that could just egg them on to want to stay in touch with your family because they know it will bother you (in cases where things ended badly and they don’t respect your feelings).

And just to reiterate from earlier … If things ended really badly from things such as cheating or abuse, it should go without saying that your family should be on your side and cut ties with your ex.  That said, if kids are involved, you can’t avoid it, but there should only be contact because of the kids and it is also crucial to ensure that there is no negative talk about anyone in front of the kids. Because the kids don’t deserve to feel caught in the middle or feel stressed or anxious. And don’t think that the kids aren’t listening when you are talking or that they don’t pick up on things. They are MUCH wiser and receptive than you know. Just because they may act like they don’t know what’s going on, trust me, they do…at least to some extent. AND the number one thing, if some sort of abuse happened, you have to ensure that the kids are not being subject to the same abuse because that is 100% unacceptable and it is your responsibility to ensure that it is reported to the authorities and child services.

There are also many cases where your ex is only staying in contact with your family as a way to manipulate you or keep tabs on you. Or they could even just be doing it to piss you off and get under your skin. I mean, let’s be real. People’s emotions are usually all over the place after a breakup, whether due to anger, resentment, or sadness, and it usually takes a good chunk of time before the rational thinking fully kicks in.

The last thing anyone needs is an ex trying to look like the angel, while making you out to the bad one…or spreading personal info about your relationship…or asking questions about your current dating situation. Your life after a breakup is none of your exes business whether things ended good or bad – UNLESS YOU yourself choose to share details with them.

They may also just be staying in contact as a way of trying to win you back hoping that your family will persuade you into getting back together.

Hopefully your family would be able to see right through any type of manipulative tactic, but if they don’t, you have the right to sit down with them and explain to them what you feel is going on and that you want it to stop.

You have to also remember that people love to gossip after a breakup – people just can’t help themselves sometimes, so it is a good idea to keep whatever you don’t want getting around to yourself. Having one close confidant (or a coach such as myself) is plenty.

In closing, there really isn’t much reason for exes to stay involved with your family. People breakup and get divorced, and part of that is moving on. It’s just how the cookie crumbles. With that comes dating someone new…and for the most part…no one is ever super keen about their new special someone still hanging out with their exes family either. It makes it look like they can’t let go and that can harm or even ruin the new relationship going forward.

When you cling onto the old, you don’t make room for new. As with everything, letting go is hard at first, but eventually you get over it and life goes on.