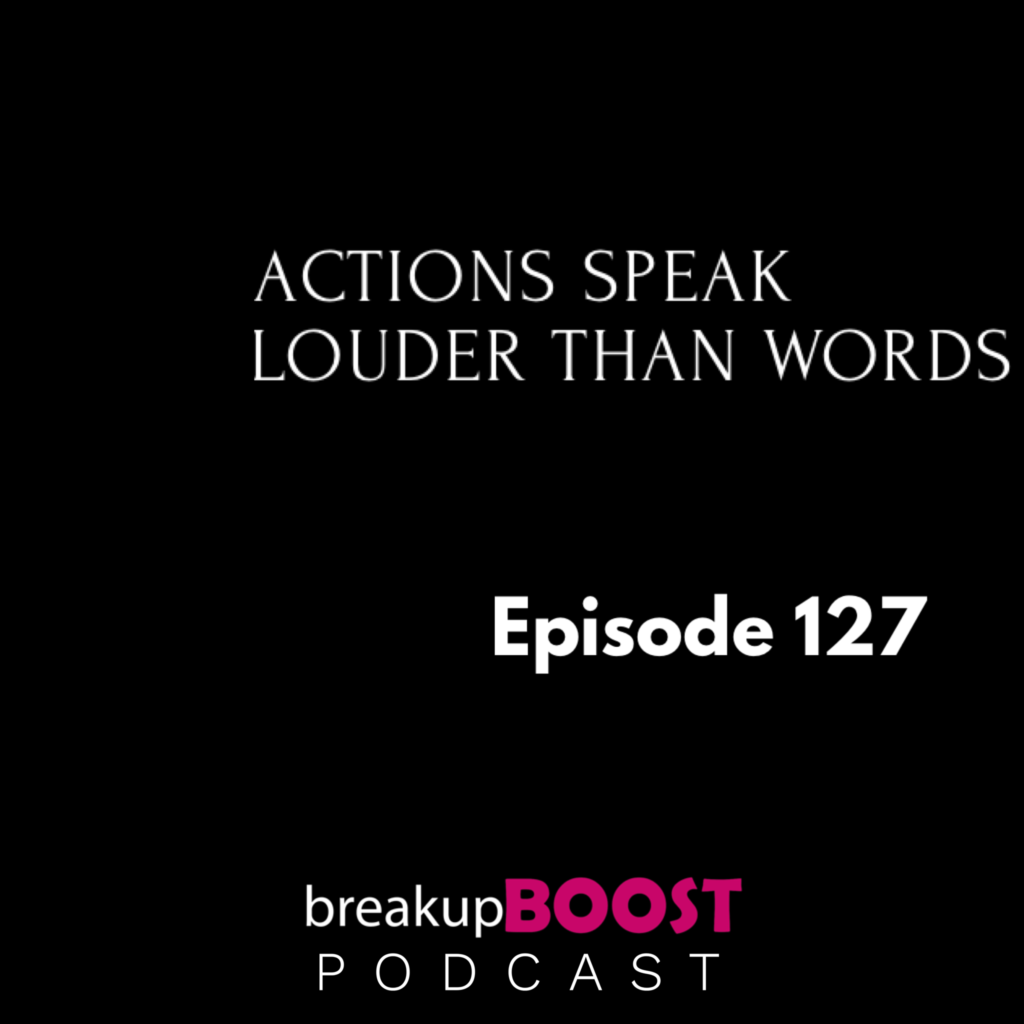 I say this phrase repeatedly on my episodes and in my coaching practice, and figured I should do a WHOLE episode on it: Actions Speak Louder Than Words.

If you want to know how a person feels about you, you will find out by how they treat you. Anyone can say anything.

Not able to listen right now? Read below:

One of the most important things you always need to remember is that actions speak louder than words.

When you are in a tough predicament with someone – whether it be a boyfriend, gf, wife, husband, or even friend…..the fastest way to get to know if someone is real or not (and pretty much how much they value you as a person) is through their actions.

Remembering this will make your life easier. But you have to actually stay true to this and not just say it like it’s just another Instagram quote and not apply it to your life. You have to keep it in the back of your mind to guide you.

For example: if your partner is always telling you how much they love you, but they don’t put effort into the relationship, don’t make you a priority, dismiss your feelings when you are upset about something, cheat on you, or lie to you – those actions are not symbolic of love.  That is why you are not feeling happy.

Love is supposed to evoke feelings of happiness, right? Of course it doesn’t mean things are perfect – but you can still feel loved even when things aren’t perfect.  There is a far cry between neglect of a relationship and expecting perfect after all.

I’m pretty sure a lot of you listening right now will be able to relate to what I’m about to say.

You have wanted things to be so good in the past or maybe even your current relationship, that even if the person has done a million things wrong or made you feel terrible a million times over, instead of sitting down with yourself and taking inventory of these things and being REALISTIC, you will instead focus on them saying things like “I love you so much. I want to be with you forever. I’ve never felt this way about anyone before. I want to marry you.”

Or maybe they are always telling you how important you are to them – so then why are you always feeling like you aren’t worth their time? It doesn’t match.

And deep down you know things aren’t cool and that you aren’t being treated good…but you are so scared to fully admit this to yourself because it is painful and scary to think about them not being in your life anymore.

And who wants to go through pain right?

The thing you need to also realize is you are going through pain regardless.

When you really sit there and think about it – if you are always upset, crying, and or arguing, you are in pain. Not to mention likely drowning in stress. So then how is that any better, right?

Pain is pain. You are not being forced into staying in a painful situation. But if you are tolerating things, you are inflicting the pain on yourself.

And heaven forbid someone else points this out to you. Well that’s when the defenses really kick in. And you know why it bothers us so much when someone close to us gives their negative opinion on something going on with our relationships? It’s often – not always – but often because it’s true.

The thing that makes us get stuck is because we often don’t want to look at the actions because then that is suddenly a harsh reality that we have to face. It means we have to be honest with ourselves. And facing it often means one step closer to the end of the relationship.

It really is a simple equation but when you don’t want to face the truth, you stay in this state of denial.

Instead of facing the cold hard facts, people often gloss over all of these less than favourable things and instead put all of the weight on this person telling them how much they love them or whatever the case may be. We would rather hold onto those words.

Anybody can say anything at any time. Anybody can think of things to say to get them out of a pickle. Anyone can cover lies with more lies.  Anyone who has the ability to speak can say any words in the English language – or whatever language they speak.

People know what you want to hear – just like when you may tell someone something because you know it will smooth things over. We have all done this at one time or another. It doesn’t guarantee that you believe that to be true 100%. They are just words. A

Also, a lot of people don’t like confrontation – they will literally try to avoid it at all costs – so instead of having to sit down and have a heavy and or uncomfortable conversation, they will just say whatever to try to make things right.

But if you notice, in many of these cases, they are consistently saying these same things to try to make things right. Well, if their actions backed up these words the first time, they wouldn’t need to keep repeating themselves. They would have just made things right. So then why are you still going along with it and wanting to believe them when they have continued to let you down?

It’s easy to say words. It’s easy to try to cover up your story. It’s easy to spout of a few sentences or text messages to make the bad vibes go away. The tough part is showing you mean what you say through actions…because that takes actual EFFORT.  If someone can’t back up their words, then you need to face the music and see things for what they are.

We can sit there and say a hundred times over – BUT they said this or they said that to try to drown out the truth of the situation – or ask ourselves “But why would they have said that if they didn’t mean it?”

Well, they may have felt like saying it in the moment, but perhaps things have since changed. Or they may have just said certain things to be able to manipulate a situation to best suit their needs.

The bottom line is = you can’t live in the past. You have to judge things on how things are in the PRESENT and how someone is treating you in the PRESENT.

People have such a hard time letting go of the good memories from the beginning….but if you only latch onto those good memories like you’re hanging on for dear life, you could find yourself living in the past for another year, another 10 years, or even the rest of your life…all because at one point, they said something sweet.

I mean, that’s like having your favorite cocktail in front of you and then someone goes and pours vinegar in it – well, are you going to keep sipping on that drink saying “Well it was really tasty before they put the vinegar in it…” and then hold onto that for the rest of the night? No, of course not. You won’t have anymore of it because you no longer like it and it doesn’t feel good to drink it. Instead you remove the drink from your hand and order another one.

Or maybe you have a favorite pair of jeans….but it’s gotten to the point where they are so worn out, they got a hole in the ass. Well, are you going to keep wearing them because they used to be in great condition? No. You accept that they are no longer in good condition and you can’t walk around with your ass sticking out of your jeans and you have to let go of them.

Sometimes things just don’t go back to the way they were. Look how many people get married saying “When I get married, it’s one time and one time only. Divorce is not an option.” Well sure you are going to want to believe that – I mean who wants to get married thinking they’re going to get divorced? But around half of marriages end in divorce. That’s just the way the cookie crumbles.

So many things happen in life and a major part of going through life is facing those challenges, accepting them, and finding a way to move on from them. Nothing is guaranteed. People change. Our environments change. Our lifestyles change. Nothing stays the same. That’s why when we get involved with someone, we are always taking a bit of a risk with our hearts – but that doesn’t mean that you just never date anyone again because there is a risk.

For example, say you want a chance at winning the lottery … you will only have that chance if you actually go to the store and buy a ticket. But we all know that there is no guarantee that we will win a prize from it. But that doesn’t stop people from buying the tickets.

You can’t go through life being scared. But it definitely helps to be smart about things, learn from your experiences, and make better decisions in your future.  That’s one way you can save yourself of a lot of heartache.

So just to reiterate. The main message here is to admit it to yourself when you know that someone doesn’t have the best of intentions towards you. Don’t ignore their actions. Don’t hold onto something from the past because it carries no weight if it is the opposite of what is going on in the present.

Don’t be afraid to let go of a painful situation that is causing you pain being in it. If you remove yourself from a bad situation, then you start the healing process. If you stay in a bad situation, you are just prolonging it and denying yourself true happiness. And when I say true happiness…I don’t just mean meeting someone new. I mean being happy with yourself.

I know how hard it is to find the strength sometimes to make a big move and let go of something that is not serving you well…but trust me, it’s worth it.

At the end of the day, don’t do yourself and injustice and live in la-la land.

And I want to close off with 3 of my favorite quotes that relate to this episode: